The Museum of Science and Technology in Islam is located on the campus of The King Abdullah University of Science and Technology (KAUST), an international graduate-level research university located on the eastern shore of the Red Sea, approximately 80 kilometers north of Jeddah, Saudi Arabia. The museum is part of KAUST’s teaching and learning facilities, and it celebrates the role that Muslim scholars had during the first Golden Age of Islam in laying down the foundations for modern civilization. The museum’s presence on the campus is a constant reminder of the contributions these Muslim scholars made to shape the world we live in today.
The project, commissioned for the museum, was to interpret, construct, and install the Cartographer Muhammad Al-Idrisi‘s 1154 world map, Tabula Rogeriana, in a medallion. 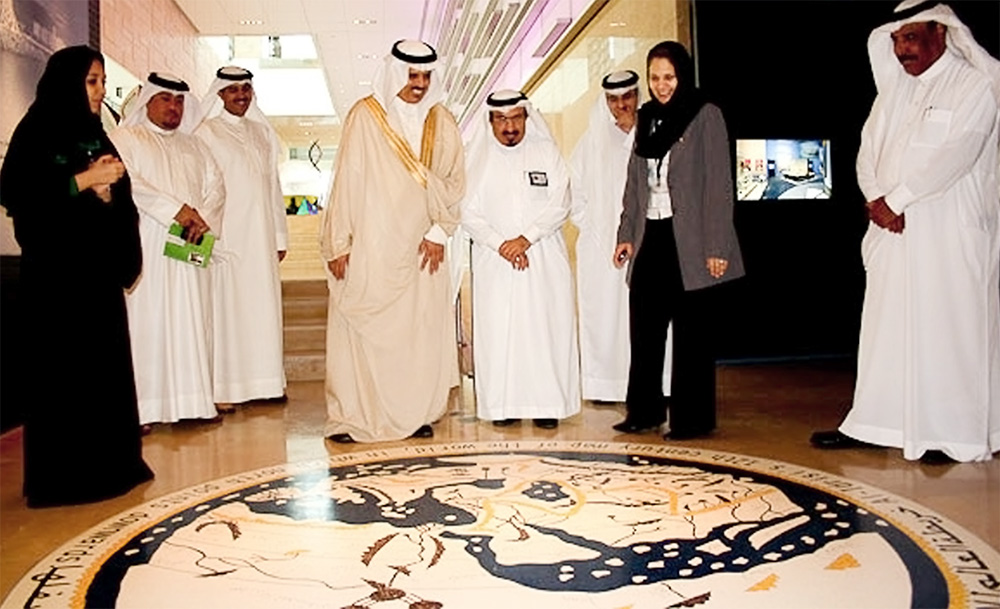 Because the medallion had to be 2.5 meters in diameter, the drawing of the map was reinterpreted into CAD so that all the elements of the map could be individually scaled. For accuracy, the Arabic calligraphy for the map’s legends was submitted to a scholar for proofreading prior to shaping the metal strips.

The medallion was constructed and installed in Fribel’s warehouse in Portugal as if it was going to be installed in its permanent location in Saudi Arabia.

Zinc divider strips of varying sizes were used for the outline of the map, accurately translating the map’s design. After the contours of the map were recreated with the metal strips, the approved colors of Epoxy Terrazzo resin were poured in place into each separate element of the map. Subsequently, the medallion was ground and grouted, as if the final installation was to be in the Portugal warehouse.

To this day, the medallion is flawless. Despite being constructed in Portugal and split for transportation, the medallion gives the impression that it was poured as one piece in situ, as no seams or connection joints are visible.

The museum was opened by HE Ali Al-Nuaimi, Minister of Petroleum and Mineral Resources, and Chairman of KAUST Board of Trustees, on February 19, 2010.